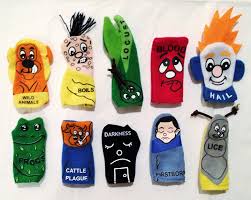 These are the ten plagues.

You may not be able to see from the back, but I’ve quickly donned some finger puppets: a smiley frog, and a lion and a louse; a cow with a thermometer; a black sleeping figure to signify darkness.
In total there are nine cute figures and one, slightly more disturbing – but peaceful – puppet to signify the tenth plague, the death of the first born.

This is what the ten plagues have become for many of us – when we read Torah, when we tell the story of the Exodus on seder night.
At best an over-familiar literary trope, perhaps a question on Only Connect.
At worst, part of a children’s story, a selection of finger puppets.

That they have become such reflects our comfort, our security, and our rationality – so the rivers turn to blood… the water companies will sort it out.  In the meantime we can get bottled water in the supermarket.
And anyway, that’s not how the world works – rivers don’t turn to blood – we know better than that.  No need to be scared of fairy tales.  We have control.

But that is not how the ancients, our ancestors, would have read these stories.  When they were telling and retelling the narrative they would have done so with fear and horror.
They knew what it was to be vulnerable.  And each of the plagues represents a real threat, a real vulnerability.
While for us only the last, the unexpected, causeless death of someone we love, seems really horrific – for them, each one was a threat to their very existence.

Just think of the plague of locusts, that Josh has read for us this morning.
When we read about a plague of locusts it means little to us, but it should fill us with fear.
We get a sense of the impending doom that locusts might represent from the passage we chose for our haftarah this morning from the book of Joel.  “Before them the land was like the Garden of Eden; behind them, a desolate waste… Before them earth trembles, Heaven shakes, Sun and moon are darkened, and stars withdraw their brightness”.

Locusts were terrifying to the senses.
And they were life threatening in the most horrific way.  To a people operating at a subsistence level, dependent on their crops for survival, as many of our ancestors 3000 years ago were – indeed for all peoples at that time, however comparatively sophisticated, life was precarious, in balance.  A plague of locusts meant starvation.
And starvation, as the ancients understood, is a horrible horrible thing.
“Happier are the victims of the sword” the book of Lamentations tell us, “than the victims of hunger, who pine away, stricken by want of the yield of the field”

The rabbis lived a more urban life.  But they too understood the vulnerability of their existence – and in particular had a specific and deep-seated fear of hunger.  The threat of starvation was a real and present thing for them.  Centuries later, in urban Egypt, starvation was a real concern, In the papers found in the geniza at the synagogue in Fostat – some of which you can see currently in the exhibition at the British Museum – in these documents which provide a snapshot into Jewish life in Egypt in the early middle ages, there are regular references to fear of death from starvation.

To us, that fear, if not totally unknown, is for most of us not an every day presence.  We are not affected by the plague of hunger.  So when we read our stories, they are just that – stories – not projections of our lives.  But to really understand this section of Torah, we must not forget that we, those of us who live in privilege in the west, are a historical anomaly in being secure.  In not knowing the terror of hunger, ours is a new state of affairs.  And it is not one which everyone is lucky enough to share.  According to the World Food Programme, nearly 800 million people – one in nine of the world’s population – live in hunger.  Each year an estimated 3 million children die through malnutrition.  Even here, a 2012 survey by the OECD found that 8% of Britons answered yes to the question ‘Have there been times in the past 12 months when you did not have enough money to buy food that you or your family needed?

This week, we saw horrific reports and pictures of hunger from the besieged Syrian city of Madaya – images that pulled us back into the realities of the Middle Ages.  The horror of starvation – to pine away, stricken by want of the yield of the field.  A situation brought on not be a plague of locusts but by the plague of civil war.

It is worth reflecting on how the rabbis processed their fear of starvation.  As so often, their response was to take responsibility for that which they feared – to make it their problem.   Corresponding to their fear was their obligation – to respond to hunger.
So, according to Midrash Tehillim, the rabbinic interpretation of the book of Psalms:  When you are asked in the world to come, “What was your work?” and you answer, “I fed the hungry,” you will be told, “This is the gate of the Eternal – enter into it, you who have fed the hungry.”  The rabbis saw responding to starvation as a route to redemption.

They understood, too that the obligation to respond was something that was cumulative – an obligation on all of us, in our own little ways.  According to Rabbi Pinchas, in the name of Rabbi Reuven: “Whoever gives even a perutah – the smallest possible coin – to the poor, God will give that person life. If bread costs 10 perutot and a poor man has only nine, then if someone comes and gives him a perutah, then in effect he gives him life.

The experience and fear of hunger infuses Jewish law.  The attitude to tzedakah, as Martyn read for us in our study passage; the attitude to warfare – a prohibition on total sieges for even our enemy. for no-one should suffer like that.  Our ancestors knew hunger and it terrified them – and it shaped their understanding of the world, and it spurred them into action.

We may not realise it, but a plague of locusts does not look like this cute finger puppet.  It is a thing of horror.
The ten plagues from which we read this morning are not a children’s story – not something to turn into a children’s story – not only the last plague, but all of them
When we read the ten plagues we are supposed to be in awe at the power that wrought them and terrified by the result.
They are an expression of visceral fears – they are not finger puppets, but the worst things that can happen to a people.

We can only read them lightly because we do not know these plagues, and perhaps as a result, we do not fear them, and perhaps that is also why we do not take responsibility for them.

But the tragedy is that they do happen – they are happening in our world.
We remain a world inflicted with plagues.
Like the rabbis before us we should be scared of them.  And even more, like them we must respond to them.

﻿femdomss.com
We use cookies to ensure that we give you the best experience on our website. If you continue to use this site we will assume that you are happy with it.OkPrivacy policy