Archbishop gives sermon from the Bimah

Archbishop Kevin McDonald addressed Alyth synagogue and St Edward the Confessor communities (and guests) as Alyth hosted a 50th Anniversary celebration service on Sunday 25 October for the declaration of Nosta Aetate – concerning the relation of the Church with non-Christian religions.  Both Rabbi Maurice Michaels and Father Tony Convery led the service which celebrated the fostering of bonds of friendship, mutual understanding and appreciation.

Nosta Aetate literally means “In Our Time.” They are the first words of the declaration, which was written during the Second Vatican Council, the most far-reaching reform effort of the Roman Catholic Church in centuries. Importantly, it deems the Jews no longer responsible for Jesus’ death, an accusation used for centuries to justify the persecution of Jews.

Archbishop Kevin McDonald’s message was clear: “We have a mutual acknowledgement of connectedness which is so important. This event shows courage and the imagination to do things a little differently to bring about new realities in the ways we think and act. We look forward together, we hope together and we have faith in the future together”.

The packed-out event was jointly organised by Alyth Synagogue and St Edward the Confessor Church and also featured recitals by both synagogue and church choirs. 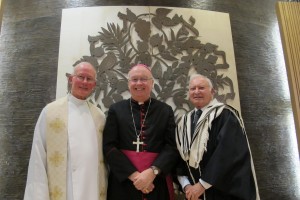 Jonathan Arkush, President of the Board of Deputies of British Jews commented, “It was the most beautiful and moving service. I particularly liked the fact that both choirs sang and that the beautiful rendition of Psalm 23 by the St Edward the Confessor choir will be shared with Alyth.”

Father Tony Convery, Parish priest at St Edward the Confessor said, “It sums up where we have reached so far with our interfaith relations, it’s a good place to be.”

Robert Weiner, Chair of the Movement for Reform Judaism commented, “Working across communities is so important and today was an absolutely wonderful example of that.”.

Rabbi Maurice Michaels of Alyth Synagogue was “so pleased with the huge turnout from both the synagogue and church communities. The creation of long lasting interfaith relationships has enabled this to happen.”

Rabbi Laura Janner-Klausner, Senior Rabbi to the Movement for Reform Judaism commented that “We should never take this for granted; these ties need to be continually renewed.”