In March 2014, the Rev. Shaun Sanders of Barnet Multi-Faith Forum (BMFF) approached Jackie Goymour, a member of Alyth Synagogue and External Relations Officer of Women’s Interfaith Network (WIN) in March 2014, about the possibility of organising a joint interfaith Seder with the objective to show non-Jewish people how Jews celebrate Pesach. As the timing for such an event in 2014 was not possible, it was decided to organise it the following year.

In December 2014 discussions began to hold a Demonstration Seder in March 2015 between three organisations, Churches Together in Hendon and Golders Green, Alyth Reform Synagogue and Barnet Women’s Interfaith Network. Churches Together was responsible for publicity, Alyth were the hosts and Barnet WIN organised the food. The concept of explaining and sharing the Seder with non-Jews was immediately welcomed by both Barnet WIN and Alyth, because this is precisely what interfaith dialogue is about.

Months of planning culminated in an excellent evening on Wednesday 25th March at Alyth Reform Synagogue where nearly 60 people, the majority Christian, sat down to a delicious meal where they could share the story of Passover with their Jewish friends. Rabbi Maurice Michaels of Alyth had prepared a Seder service, ably assisted by Viv Bellos, the Alyth Director of Music who had adapted few Passover songs so that they could be sung by everyone.

Jackie Goymour said:   “It is well-known that the sharing of food, “breaking of bread with strangers”, is the way to dispel misgivings and doubt of the other – the “ger” – the stranger, and it is intrinsic in our heritage to welcome all to our tent.” 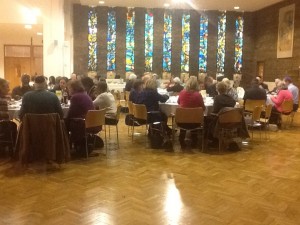